John William “Trane” Coltrane was born on September 23rd, 1926 in Hamlet, North Carolina. John Coltrane did his schooling at William Penn High School. He was enlisted in the US navy and there he played in the navy Jazz band.

In 1946, he returned to civilian life and then with Dennis Sandole (composer and guitarist) he began to study the Jazz theory studies. Until the early 1950s, he was under Sandole’s tutelage. During this time, Coltrane along with Eddie Vinson band began to play tenor saxophone. Coltrane says that this was the turning point of his musical career. He later moved to Philadelphia. By this time he was proficient with the alto, tenor, and soprano saxophone, but was known primarily for the latter throughout his career. His playing has been recorded on over 150 albums, of which only a handful are mentioned here. Coltrane began his earliest success with Miles Davis and Thelonious Monk in the mid ’50s, recording Cookin’, Relaxin’, Workin’, and Steamin’ during that time. Blue Train appeared shortly after in 1958, with Coltrane leading a performance with Lee Morgan, Paul Chambers, and Curtis Fuller at the Blue Note. 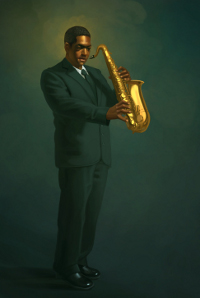 Coltrane became influenced by Muslim culture through his first wife, Juanita Naima Grubb. When his heroin addiction caused Miles Davis to fire him, he asked his wife and mother to lock him up with only bread and water. He claimed to have an experience with God to that got him out of his crippling addictions. Shortly after, Giant Steps and My Favorite Things (with Coltrane on soprano saxophone) released with Atlantic Records in the early 60s. Shortly after, he participated in collaborations with Duke Ellington on the album Duke Ellington and John Coltrane. Around the same time, Coltrane for Lovers, a compendium of ballads, was also released.

He recorded A Love Supreme in 1964 with McCoy Tyner, Jimmy Garrison, and Elvin Jones in homage to his spiritual beliefs in God through multiple religions, including Hinduism, Islam, and Christianity.

His playing became more intertwined with the avant-garde and free jazz crowds, including Pharaoh Sanders, Freddie Hubbard, Marion Brown, and John Tchicai, including albums such as Sun Ship, First Meditations, and Ascension in the mid ’60s. His last studio albums, Interstellar Space and Stellar Regions, were explorations in free jazz that were released posthumously. Coltrane married again to Alice McLeod, an accomplished jazz pianist herself, in 1966, and they had three children together throughout their relationship prior to marriage: John Jr., Oran, and Ravi. Coltrane passed from liver cancer at the age of 40 in 1967, and is buried in Pinelawn Cemetery in Farmingdale, NY.

An inspiration to many..

Coltrane’s influence lives on through students and masters alike who practice to acquire his tone and technique, as well as his son, acclaimed saxophonist Ravi Coltrane. The Saint John Coltrane African Orthodox Church of San Francisco reveres Coltrane as a saint, and continues to hold mass using Coltrane’s lyrics with prayers and hymns. He was posthumously awarded a Grammy for his solo on the album Bye Bye Blackbird in addition to a Grammy Lifetime Achievement Award in 1997. His Mark VI saxophones, a tenor and a soprano, were auctioned in 2005, but only the soprano was sold.

At least two known techniques have been named after Coltrane’s playing style as a soloist. His “sheets of sound” technique, coined by Ira Gitler of Down Beat magazine in 1958, represents his fast arpeggios and patterns scaling the entire range of the saxophone in quick succession. You can hear this technique on “Trinkle, Tinkle” from the album Thelonious Monk with John Coltrane. Another technique, known as Coltrane changes or cycles, is a harmonic movement of the chord root in major thirds over common jazz chord progressions. “Giant Steps” is a perfect example of this harmonic change in action.

The following is a clip of Coltrane playing “My Favorite Things” on soprano saxophone with Eric Dolphy, McCoy Tyner, Reggie Workman, and Elvin Jones.