Antoine-Joseph Sax was born on November 6th, 1814 in Wallonia, Belgium. Letters and remembrances of him shaped his personality as intense. He was a man fraught with peril for most of his life. He suffered injuries, poisoning, and two comas in his childhood alone.*

Despite his proclivity towards personal disaster, his skill with instrument making and improving was honed over years of working as an apprentice to his father, Charles-Joseph Sax, who introduced several changes to the design of the french horn. When Adolphe Sax relocated to Paris in 1841, he began creating valved bugles, which became known as saxhorns. This instrument influenced the beginnings of the flugelhorn and modern euphonium.

He ran into intense competition from local instrument makers not soon after. They were able to combine their efforts against him into lawsuits by the Association for United Instrument Makers, which could petition for royalties from new instruments and generally hamper the progress of Sax in making his instrument public. His factory suffered burglaries, he barely escaped at least one known assassination attempt, and his most trusted assistants were bought out for their secrets by his competitors on many occasions.* He also suffered two bankruptcies throughout his life. 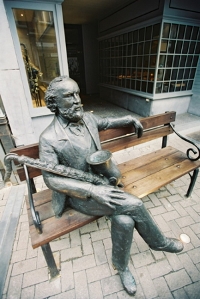 He patented the saxophone in 1846. On paper, he designed the full family of saxophones (from the deep subcontrabass to the petite sopranino). This gained him a teaching job at the Paris Conservatoire for a few years. He also pushed for the saxophone’s acceptance in military bands to outshine those of the neighboring Turkish and Austrian bands, which it did in the mid-1840s. Towards the end of his life, however, his second bankruptcy forced him to close his factory, which was eventually bought out by Selmer. He petitioned the government for a small allowance to live on in exchange for his renowned inventions that would forever place Paris on the map for the birth of the saxophone.

Repertoire for the saxophone began with a rough start. The tenor could often double cello parts in an orchestral score, for example, but creating original classical pieces for the saxophone initially required Sax to commission new pieces out of his own pocket. Otherwise, most orchestras (sadly, both past and present) were not keen to allowing saxophones to join. However, the saxophone did gain the approval of composer Hector Berlioz, who publicly wrote of the instrument in a positive light in 1842. Modern day avant-garde compositions have proliferated across the world as well.

In America, the young saxophone’s associations with jazz and other street music seemed to perpetuate an image that lacked the mastery or discipline required to play classical repertoire. Players like Sigurd Rascher and Marcel Mule proved that this notion was, and remains, entirely false, but popular media perpetuated the image for many years nonetheless. He passed away in poverty on February 4th, 1894.

*Summarized from The Devil’s Horn by Michael Segell, a highly recommend book for learning about the history and influence of the saxophone:

Return from Adolphe Sax to who invented the Saxophone