Primarily self-taught, Candy Dulfer has been a whirlwind of funky saxophone playing since a young age. Her father, Hans Dulfer, was also a saxophonist, but he never pushed her into learning.

Always stoked to play the saxophone herself, she started on soprano as a child because she felt her father’s tenor was too heavy. She soon switched to the Alto, which she continues to play today.

She led her own band at 14 – known as Funky Stuff – and soared from there. In 1990, she debuted her first album, Saxuality. It scored her a Grammy nomination and sold over a half-million copies. Known for her funk playing, she also has hits in the smooth jazz world. “Finsbury Park, Cafe 67” was a huge success in 2003, reaching the Number 1 on the R&R Smooth Jazz Chart in the USA. She’s also known for playing on “Lily Was Here” with Dave Stewart in 1989. The song was the main theme for the Dutch film De Kassiere, and was released as a single. It topped the charts in The Netherlands for five weeks! 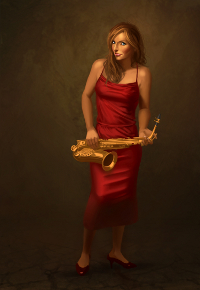 Candy has also featured into American popular culture, appearing on Prince’s “Partyman” music video as part of the Batman (1989) soundtrack. She also made an appearance on Saturday Night Live with Prince, and toured with him on his 2004 Musicology Tour.

She has played on numerous television shows in many countries, including The Arsenio Hall Show, Good Morning America, and Jay Leno’s Tonight Show.

Ever the multi-talented, she also starred on her own show in the Netherlands, Candy Meets, where she interviewed past friends and co-performers such as Maceo Parker, Dave Stewart, and Mavis Staples. She also interviewed her father, Hans Dulfer.

Candy has also been open enough to include solo transcriptions of her own solos as PDF Sheet Music for free on her website at www.candydulfer.nl
From her own words on the site: She recently released a new album, Funked Up & Chilled Out in 2009, which is available in stores or at her website. Check out this video of Candy Dulfer’s “Lily Was Here” with Dave Stewart: