Known as “The Bird” for his love of delicious chicken (also known as “yardbird”) Charlie Parker is branded into the mind of many saxophonists as a bebop genius. His vertical melodies seemed to breeze across chords at lightning speed with a deft accuracy that many players still try to emulate today.

Born in Kansas City, Kansas, Charlie Parker was raised primarily by his mother. Originally, Bird didn’t show an aptitude for music. Although his mother saved up money to buy a used saxophone for him, he didn’t take to it right away. Bird began in the school band on the baritone horn, but later witched to the clarinet at the request of his teacher. From there, he began playing saxophone outside of school, including nearby clubs. Eventually, he preferred making money to school, and lied to the nearby union about his age to keep playing and dropped out of school altogether. He was married and a father by the ripe age of seventeen.

Even from a young age, Bird had a way of pushing himself into challenging musical situations. At first, he only knew a few songs, usually only in their original key. (Honeysuckle Rose was one of the first tunes he learned by heart.) He would try to step in and play on a solo or two, but he was often booed off the stage and out of the club. One time, Jo Jones (drummer) threw a cymbal at him because his playing was not good enough. He kept his ambition regardless, taking gigs and trying to learn theory from pianists and other musicians he came in contact with. 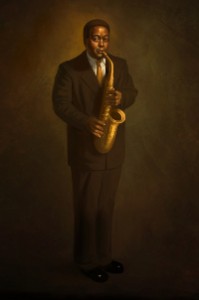 When Bird made the fateful pairing with Dizzy Gillespie, they unleashed a new kind of jazz: bop or bebop. Many consider it to be the first form of jazz intended for art, rather than public use. The frenetic tempos of bebop make it difficult – but not impossible – to dance to, and therefore bands were not often hired for the dance halls of the 1940s and 1950s. Some of the most well-known bebop players also began introducing one another, and their students, to crippling drug addictions.

Charlie himself was a heroin addict from a young age, but was also known for being able to have seemingly endless physical limits. He drank, ate, and used drugs as much as possible until a peptic ulcer woke him up to his limits later in life. He finally passed away from a heart attack at thirty four years of age. The doctor who examined him, however, thought he was in his fifties. His last album, Jazz at Massey Hall (1953), was recorded just two years before his death.

Most saxophone students are familiar with “Charlie Parker’s Omnibook”, a compilation of solo transcriptions from his performances. Phrasing and technique are crucial to working through every solo. Otherwise, the notes can seem to be as incoherent as a run-on sentence. Listening to and examining his solos at a slower pace can make more sense of his flexible rhythms and harmonic choices.

You can learn more about Charlie Parker at this Tribute site.

A great addition to the library. This book is a great collection of stories from his Family and some well written stories from many others who knew Bird.