Born in 1956 in Washington as Kenneth Bruce Gorelick, Kenny G is a saxophonist who plays primarily smooth jazz and adult contemporary music.

He is the modern era’s top-selling instrumental musician, with over 75 million total albums sold. As happens with many famous people, he is notable for possessing a huge base of loyal fans while also being the target of derision by many listeners and critics alike.

For instance, Kenny was criticized for overdubbing a classic recording of Louis Armstrong’s â€œWhat A Wonderful World,â€ with his detractors claiming that such a staple should not be altered and suggesting that as a recording musician his understanding of classical jazz was somewhat limited. On the other hand, some music journalists suggested that Kenny’s interpretation might expose classic jazz to a new audience. In reality, reworking someone elses material to give it you own style finish is becoming relatively commonplace these days, regardless of what the critics have said.

Kenny G first began playing the saxophone after hearing the instrument on TV as a boy. Fascinated by its sound, he obtained a Buffet Crampon alto saxophone in 1966 at the age of 10, though he would later go on to specialize in the soprano saxophone. He learned by studying under a local trumpeter and playing along with saxophone records. During this time, Kenny G was particularly influenced by the music of Grover Washington Jr., considered by many to be one of the founding fathers of the smooth jazz movement. Kenny famously did not get into the first jazz band for which he auditioned, but earned first chair in the group the following year. 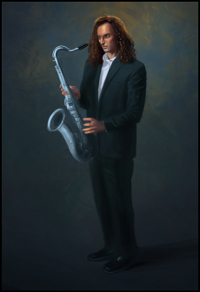 Signing on as a sideman in Barry White’s Love Unlimited Orchestra in 1973, Kenny began his professional career at the age of 17. He played professionally while studying accounting in college, beginning his solo career after a stint with Jeff Lorber Fusion. He was signed to Arista Records in 1982 after he recorded a take on ABBA’s hit “Dancing Queen,” which caught the attention of the label head. He saw commercial success quite quickly, with both his second and third studio albums both selling enough copies to go platinum in the United States.

His fourth album Duotones, was even better-received than his previous releases and sold more than 5 million copies. His success continue with Breathless, his sixth album, which at over 15 million copies sold remains the highest-selling instrumental album of all time. His album Miracles became the world’s best-selling Christmas album at over 13 million copies. In 2003, the Recording Industry Association of America announced that Kenny was the 25th highest selling artists in the U.S., a very significant accomplishment for a jazz musician.
Kenny was also awarded a Grammy for Best Instrumental Composition for his album Forever in Love. One of his songs was even remixed by two popular DJs in 1997. While these remixed tracks were initially promotional releases distributed only to dance clubs, they eventually reached the number 1 spot on Billboard’s chart for dance music.

Today, He continues to be a prolific recorder, with 14 albums to his name. This doesn’t include a great list of live albums, holiday albums, compilation albums and a single EP. These albums have spawned over 15 singles, two of which reached number 1 on Billboard’s Adult Contemporary chart. Several more of his singles have cracked the chart’s top 10 at various points.

In addition to managing his saxophone line and continuing to actively tour and record new music, Kenny is an avid golfer. Gold Digest ranked him as having the best golf handicaps among major musicians in 2006 and the second-best in 2008. His current handicap index is +0.6. He has taken part in a number of Pro-Am golf tournaments. In 2007 He and Phil Mickelson shared the AT&T Pro-Am title with Tiger Woods and Jerry Chang. Kenny lives in Malibu, California with his wife and two sons. He is also an experience pilot and frequently flies his private seaplane.