Starting off the Interview series is an an interview with Romy Bylin. The Saxophone player from Melic, a London based Four-piece band who are making waves in the Rock world.

A few Questions for Romy:

Where did you grow up?

I grew up in Cape Town, South Africa, and then moved to New Zealand when I was 16.

When did you start playing the Saxophone?

I started playing when I was 10 years old. My mom enrolled me into a dedicated music school that I would go to after normal school hours. Was a fantastic school – the head would go to Berkeley School of Music (in Boston) once a year to get new ideas for the school.

So you’re a Piano and Saxophone Player. What led you to pick up the Sax?

I started with Piano when I was 6. It was my mother’s influence that pushed me towards the Sax. She would take me to Jazz clubs on a Sunday evening, where I was 100% sold on the Sax.

Who have been your greatest influences?

My influences have changed a lot since I started playing – I used to listen to a lot of jazz when I was a teenager but now prefer listening to Sax played outside the Jazz world. I think because I was taught with such a strong Jazz influence, I still find it fascinating when it is used outside that genre. More recent influences have been Fat Freddy’s Drop, Rolling Stones, Frank Zappa. There is a Frank Zappa album called Hot Rats with a track called The Gumbo Variations – this track has the craziest Sax playing I have ever heard – amazing. 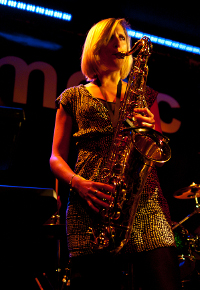 Who do you admire in the Saxophone world?
David Poole from Goldfish – the licks he comes up with are so fresh and really capture the sound of South Africa.

From Classical to Rock… What provoked that transition?

Probably Guns and Roses when I was 13! I still enjoy playing and listening to Classical music, it is so complex – can you imagine writing a symphony? Incredible.

What’s your greatest moment on stage playing Sax? When, where, why?
When I was 15 I went to the Grahamstown Festival with my friends from music school. We were all selected to play in the South African Youth Jazz Band. I kind of miss those Big Band days with the old Jazz standards, playing Count Basie. We played to quite a big audience, I was SO nervous, but the music was so big and I felt enveloped by the band.

What is your favourite song with Melic – Where can we hear your talents?
Well, I have two favourite songs of the ones we have recorded – on keys it is Followers, and on Sax it is The Chase. Of the ones we haven’t, it’s a new song called Ting Tong, but you’ll have to wait a few months before the recording comes out!

The latest Melic EP with Romy Bylin playing Sax, can be heard at www.melicband.com, and check out their brand new music video below:

Return from Romy Bylin to see other Famous Saxophone Players

Return from Learning about Romy Bylin to Saxophone Players Guide